This work provides guidance on how to take advantage of the synergies between CCA and DRR in order to strengthen institutions, their networks and their respective capacities in reducing the impacts of extreme events triggered by climate change. This is the first stage, with further work due for release in 2019.

Strengthening institutions strengthens society itself. Institutions work best when they fulfil their functions strategically, connect with key allies and partners, and expand to serve a broader public.

Institutional strengthening focuses on increasing the capacity or ability of institutions to perform their functions with particular focus on improving governance. By institutions we mean a wide range of individuals, groups, communities, NGOs, associations and government bodies. Strong institutions not only serve their communities but also drive meaningful change at the local, regional, national, and even international level. This multi-level cooperation and governance needs good management and organisation.

In CCA and DRR, institutional strengthening may refer to seizing opportunities for cooperation and collaboration, reducing weaknesses in networks, avoiding duplication of efforts, improving common understanding and implementing legislation and policy as well as improving knowledge management and sharing.

The CCA and DRR communities have developed separately and sit within different European and national governmental institutions, agencies, research groups and knowledge platforms. This leads to inefficiencies and incoherence across activities, communication and knowledge exchange. Strengthening collaboration between CCA and DRR institutions is important to improve societal responses to the challenges of climate change and weather-related extreme events.

Our climate is changing, with the expectation of more frequent and intense extreme weather events such as heatwaves, drought or heavy precipitation, also in locations traditionally less prone to such events. Such changes need to be reflected in institutional arrangements, capacities and through multi-agent coordination.

This report provides recommendations for institutions that are responsible for the planning and implementation of adaptation and disaster risk reduction strategies. It is aimed at all experts working in climate change and / or disaster risk at international, European, national, sub-national and local levels.

The concept of resilience is common to both CCA and DRR – a system’s ability to function no matter what stresses happen, prepare for a crisis, maintain its critical functions in the face of crises, and return quickly to equilibrium. Reducing climate-related losses through more widespread implementation of DRR measures linked with adaptation is also common to both.

Financial, human and natural resources can be used more efficiently, resulting in increased effectiveness and sustainability of both adaptation and DRR approaches (ProAct Network, 2008).

DRR and CCA are both cross-cutting issues and it is critical to involve a broad spectrum of stakeholders. This can make it difficult to find a common language and understanding. About 60% of the terms currently used in the CCA and DRR communities overlap. While the words are used in both fields, they can have quite different meanings, depending on the context and person involved, and resulting in numerous misunderstandings.

DRR and CCA shared objectives have the potential for synergies between the respective scientific, practice and policy communities with significant benefits. Realising these synergies, however, can be challenging. For example, risks, vulnerabilities and solutions are framed differently in the different communities of practice, resulting in diverging policy, planning processes and practices in Europe.

The relationship between DRR and CCA is most commonly addressed through the concept of mainstreaming which is currently underway in European, national and sub-national policies, strategies and plans as well as slowly being incorporated into practice.

Figure 1: Draft image of the DRM and adaptation cycle. 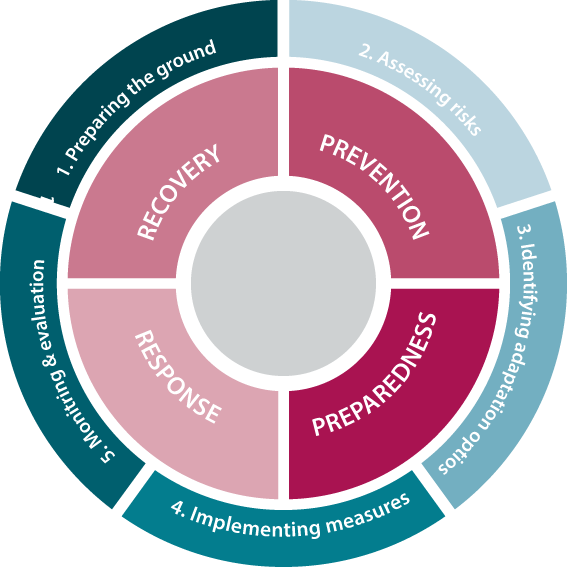 Limitations within and across institutions, such as CCA and DRR being affiliated to different ministries/authorities (UNISDR, UNDP, 2012, Amarantunga et al., 2017), a lack of regulatory quality in terms of legislation, and also norms and standards are not effectively put into practice in low and middle-income countries (BMZ, 2012).

Other barriers such as the lack of direct funding to support integration of DRR and CCA, the difficulty of quantifying the benefits of DRR and CCA (UNISDR, UNDP, 2012) and mainstreaming fatigue (ProAct Network, 2008).

We use cookies to ensure that we give you the best experience on our website. If you continue to use this site we will assume that you are happy with it.Ok