Why the EU should worry about the weather

Geo-political power shifts, uncertain economic development, migration, populism, BREXIT – Europe lives in tumultuous times with multiple challenges. In 2017, President Juncker started a debate on the Future of Europe: What future do we want for ourselves, for our children and for our European Union? A White Paper mapped out the drivers of change in the next decade, presenting a range of scenarios for how Europe could evolve by 2025.

The emphasis is on the choices to be made to shape the unavoidable transformation of the Union rather than to be carried with them. That same year, three European think tanks emphasised that climate change should be one of the key challenges that need to be addressed in this process. These focused mainly on mitigation: the challenges posed by the energy transition required to meet the goals of the Paris Agreement, of which the EU was one of the main driving forces. However, even if the goals of Paris would be achieved, and even more so when these goals would not be achieved, Europe’s future will be affected by both slow-onset climatic changes but also by the changing occurrence of extreme weather events.

The frequency and scope of extreme weather events is projected to increase and may increasingly exceed the capabilities of individual EU member states to save lives and limit economic damage.

In recent years, large scale floods, freak storms, heatwaves and scorching droughts have already affected large parts of Europe. Their frequency and scope is projected to increase and may increasingly exceed the capabilities of individual Member States to save lives and limit economic damage.

At first sight, a scenario in which Member States would do much more together would offer the best opportunities to enhance future resilience and manage climate risks. Existing mechanisms like the Union Civil Protection Mechanism and the EU Strategy on Adaptation to Climate Change along with their supporting implementation mechanisms like knowledge networks, pooled resources and solidarity-based funding schemes could readily be strengthened. The EU’s position in international climate negotiations would be bolstered. However, such a scenario also has the pitfalls of over-regulation, sluggish coordination and a mismatch between the slow development of formal guidelines and frameworks on the EU level versus the needs of fast decision-making to address urgent climate risks at local and regional levels. Expansion of the EU may further dilute or slow down CCA and DRR response capabilities.

A scenario in which the EU would re-center its focus on the single market could lead to innovative market-driven solutions to climate risks boosted by an increasing role
of the private sector.

In a scenario in which the EU would re-center its focus on the single market, much less coordination and cooperation can be expected in prevention, preparedness, response and recovery, and increased inequality between regions can be expected. However, this scenario may lead to innovative market-driven solutions to climate risks, boosted by an increasing role of the private sector, including but not limited to financial instruments like in the insurance business.

A scenario in which Member States would do much more together would offer the best opportunities to enhance future resilience and manage climate risks.

In a scenario in which a limited number of Member States with similar challenges would enhance their collaboration on climate risks (“coalitions of the willing”), there would be a greater disparity in the rate of development between Member States with regards to science, economy and security and differences in the willingness to act. But Member States facing similar issues can move faster in developing solutions without waiting for other Member States to move at the same speed. This can lead to a tailored approach, with efficient and prompt response capabilities related to specific needs and innovations. Other Member States would have the opportunity of joining over time. In a scenario in which the EU would do less but more efficiently, obviously future climate resilience will depend on the selection of CCA and DRR as one of the priority areas.

The EU’s future is unknown. How can the EU manage extreme weather risks under this uncertainty?

This PLACARD policy brief is based on a foresight workshop which was held from 11-12 December 2018 in Brussels. Upsides and downsides, challenges and response actions were discussed for 3 of the 5 scenarios from the EU White Paper on the Future of Europe and three climate cases (floods, heat waves and droughts, and storm surges). 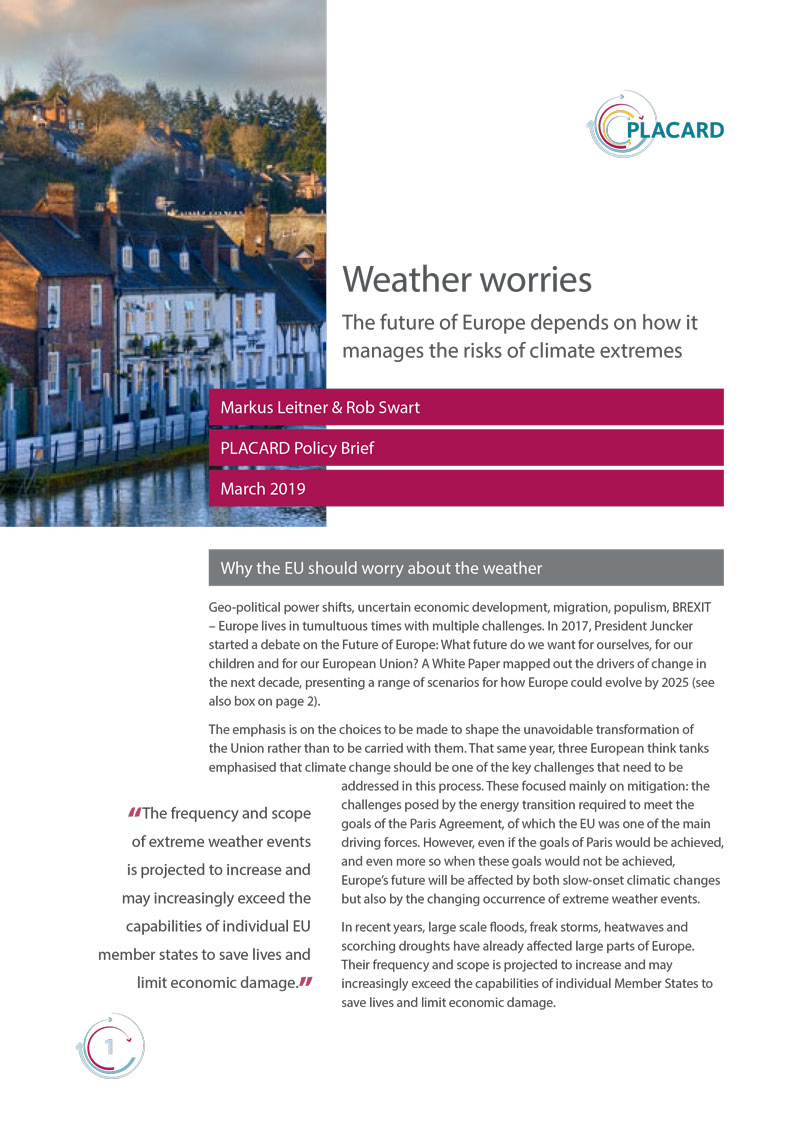